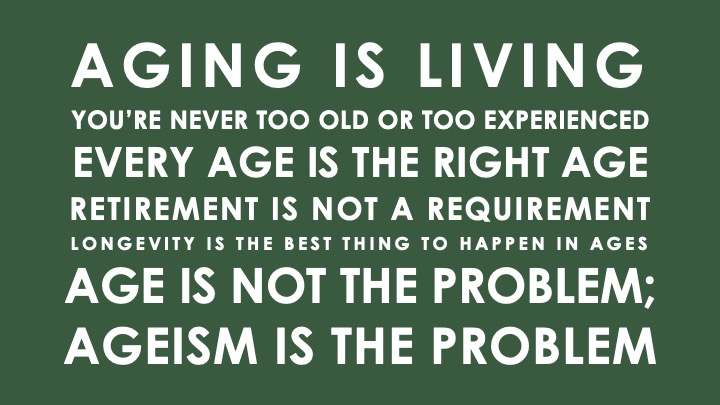 Many, many years ago, although it doesn’t seem that long ago to me, I was asked to leave work, go home, and change. My misdemeanour? I dared wear a pantsuit to work. I was, at the time, working as an assistant editor for a Canadian women’s magazine. Ironic, isn’t it? First, let me tell you what I was wearing: a turtleneck sweater, sleeveless mini-skirt-length tunic top, and matching pants, perfectly acceptable business wear today. My attire, though, didn’t require that I actually leave the office. All I had to do was close my office door and remove my long pants to reveal bare legs. That’s but one of the millions upon millions of examples that inspired the worldwide Women’s Liberation movement. I must say, this and other incidents did get me riled up. I paid attention and took an active part.

Now as an older worker, I’ve come face to face with age bias and I’ll bet you have, too. They may range from small, systemic acts that embarrassed or dismissed you, or cringe-worthy jokes about ageing, to the big ones that caused hurt or harm, like forced retirement and biased hiring practices. Sound familiar? Think about your own stories and those of others you know; then ask yourself, “isn’t it time for an Age Liberation movement?”

I invite you to watch the Old Guy series; you’ll find the links below. Billed as a comedy, these seemingly lighthearted, skits bite deeply and cut to the quick as they exemplify the bias experienced by older adults.

Each Old Guy episode is only between 3:00 and 5:30 minutes long but the message is clear; this is how many older people are perceived. Do any of the characters look familiar to you? Do you find them to be funny? Let us know what you think by emailing Top Sixty with Age Liberation in the heading.

As the Old Guy says at the end of the final episode, “People see these shows and think that’s what old is! I’ve become part of the problem, Winnie”.

Age equity is a social justice issue. It’s more relevant than ever, especially in a world that is ageing rapidly. Ageing adults deserve to be respected and accorded the same rights as others. It’s going to take a movement to set the record straight.

We at Top Sixty think it is high time for an Age Liberation movement. Join the conversation!
CONTACT US for further information.