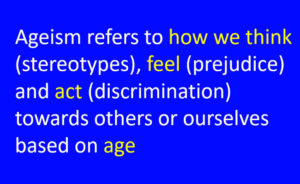 By Helen Hirsh Spence
Image adapted from WHO Definition of Ageism

In honour of the International Day of Older Persons on Oct. 1, Top Sixty Over Sixty hosted a session on ageing and ageism. The general consensus after an hour long discussion on how to deal with ageism was quite straightforward. The time has come to move beyond raising awareness about the issue to more action.

Not knowing who would be in our audience, we deliberately shared some very basic information about the world’s changing and ageing demographic, the large percentage (82%) of adults between the ages of 50-80 who experience ageism daily, and the harmful impacts of age bias on individuals, communities, and economies. The purpose was to provide a baseline of information for a more fulsome discussion in breakout groups.

Not surprisingly, the level of engagement was spirited. Many participants had a very good grounding in gerontology, and they eagerly shared their knowledge and expertise with those who were less informed. It seemed that just talking about the issue was very important to the more than fifty participants. Ageism isn’t a topic that comes up often in casual conversation, and there isn’t a universal understanding about how it manifests itself.

As a result of one exercise, a participant realized how negatively they perceived ageing and vowed to start changing that in themself and societally. Just hearing how others were combating ageism in their day to day lives provided inspiration and a jumping off point for others.

Here are just a few of the ideas that were discussed during the course of the event:

Unlike other “isms”, ageism impacts us all in spite of our race, ethnicity, sexual orientation, or ability. Ageing is literally part of living, but what it means to age tends to differ. Those persons who have had early exposure to grandparents or other older adults, tend to see ageing more positively.

The following quotes are from The UN Global Report on Ageism:  “Globally, one in two people are ageist against older people”, and “Ageism has serious and far-reaching consequences for people’s health, well-being and human rights”. Unfortunately, in North America, ageism is still considered socially acceptable which is why it is rarely referenced in “Diversity, Equity and Inclusion” strategies in businesses.